It has been three years since I last competed in a half ironman race: the 2013 Vineman Ironman 70.3. Three years and two kids later I was back for the 2016 edition of the Vineman 70.3. In the past 4-5 months I’ve done my best impression of the Rocky Balboa training montage (Yo Ondi!). I put in consistent 9-10hr training weeks: a consistency I hadn’t achieved since my Chico State cross country and track days. You might be wondering how that is possible with two small children and a full time job. Maybe I’ll save the answer for another blog, but there is no way I would have done it without the FULL support of my wife, Ondi. If I don’t thank her at least two more times in this blog, please pinch me the next time you see me.

Ondi’s a special woman. It is so important to her that she and the kids are with me during these crazy races. Our two kids, Sarah and Makayla, are really sweet kids, but Sarah’s almost three and Makayla is a year old and they are not immune to meltdowns accompanied with long car rides and lack of naps. Ondi does an amazing job patiently loving these kids throughout our triathlon adventures. Thank you Ondi; you’re the best! 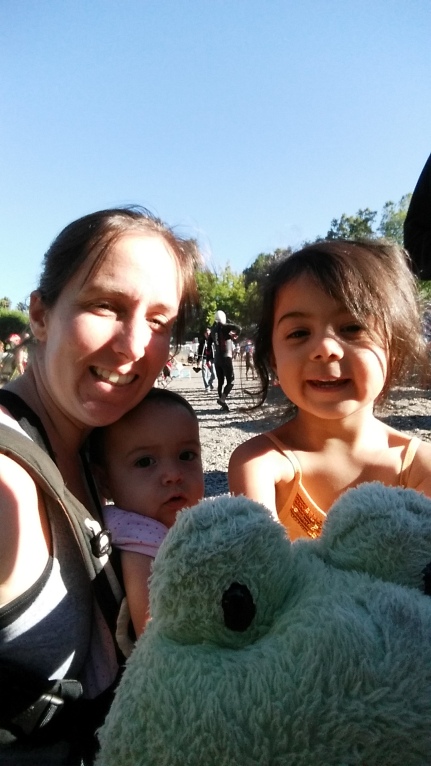 My overall goal for the race was to better my 4:39:20 personal best set in 2013. I thought this was very doable given my training, vastly improved swim stroke (thanks Sean Molina!), and the fact that I raced the 2013 race on a 2004 Trek road bike. This time around I would be on a triathlon bike with race wheels, so I was expecting significant improvement on the bike.

Vineman’s swim course is notoriously easy. This section of the Russian River is very narrow, shallow, and void of a current. The water temperature was almost 72 degrees which felt warm compared to the two triathlons I’ve done this year where the water temperatures were in the mid 50s and low 60s, respectively. The horn blew at 8:16am to start my swim wave (males age 25-29). I started in the middle second row, hoping to catch a draft in the beginning of the swim. I lost the draft probably 5 minutes into the swim. I forgot how many people you have to dodge from the swim waves in front of you. This forced me to sight early and often as I dodged and weaved through slower and standing swimmers. It was a fun game and resulted in a 30:24 swim time, 2:55 improvement from my 2013 swim time.

The bike route is a rolling 56 mile tour of vineyards in Sonoma County with 2,100 feet of total climbing. I race the bike primarily on feel. The speedometer is not as helpful on this course since the majority of the bike is rolling hills, mixed with some flat sections. Like I mentioned before, I was very excited to see how much faster I could go on my triathlon bike than on my road bike in 2013. I may have been overly excited. Around mile 45 my lower back/hip was getting tight and by mile 50 I was getting a slight hint of a cramp developing in my right leg. This was concerning for me since I’ve never experienced a cramp this early in a race. All I could think about the last 6 miles of the bike was the 13.1 mile run ahead of me and the big question, “how would my legs feel off the bike?” I turned in a 2:27:33 bike split (22.8 mph avg.), a 5:51 improvement from my 2013 bike time. 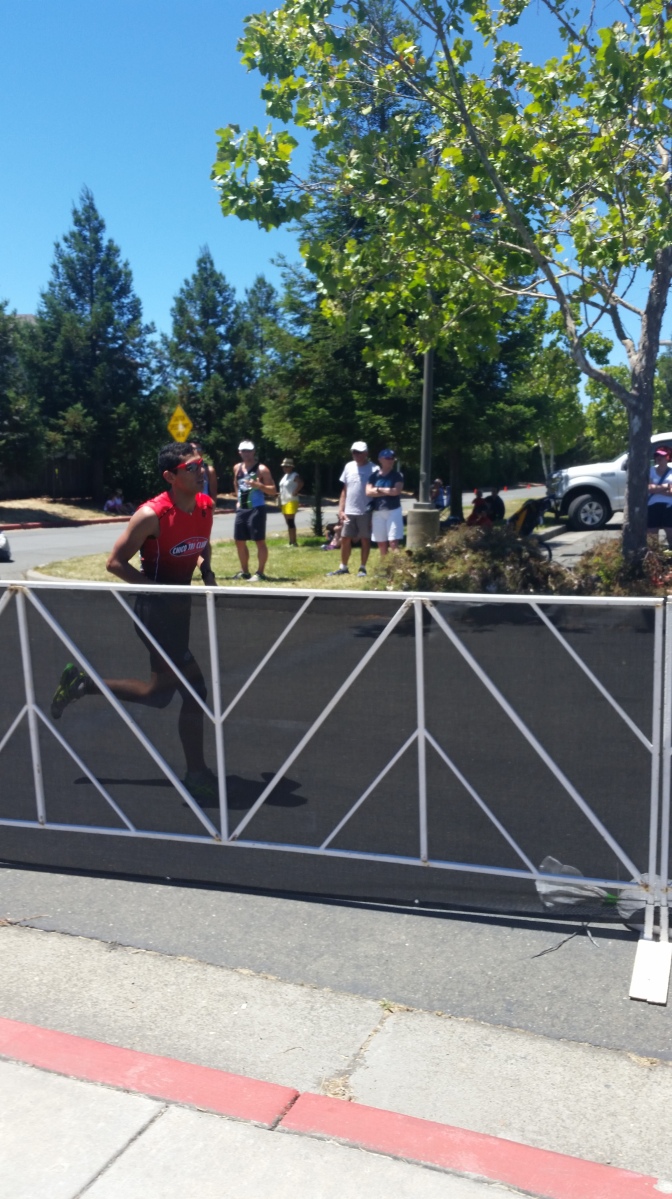 I exited T2 with the answer to the big question. My legs felt terrible. In hindsight, this was my biggest mistake in the race. I went negative way too quickly. I know better than to judge how my legs feel before at least one mile into the run. They always feel terrible in the beginning. The negativity snowballed as I missed the first mile split and then I turned in what I thought was a 9 minute mile from mile 2 to mile 3. Granted it was a hilly mile, I was distraught. With my motivation waning and dreams of a personal best thought doubtful, I turned in a 6 minute mile split from mile 3 to mile 4, which I immediately knew was bogus. After a 7:30 5th mile, I finally figure out I was not running 9 minute pace, but 7:30 pace. It was around this point that I passed by fellow CTC teammates Greg Watkins and Shawn Hughes. They were a sight for sore eyes and their encouragement was a boost of energy. At mile 7, I did the calculation in my head that I need to run sub 7:30 pace to set a personal best. The run was a suffer fest. It was a completely different feeling than my run in 2013. In 2013, I felt strong, clear minded, clipping off 6:30 miles. In this run I felt crippled, and all I could think about was how terrible I felt. I was gutting out sub 7:20 minute miles, constantly recalculating the pace needed to PR after each passing mile. I turned in a 1:35:08 half marathon, 8:41 slower than my time in 2013, ouch!

All said and done, I finished with a 4:38:16, which bested my 4:39:20 from 2013. If you do the math, my actual total swim, bike, run time was almost identical with my 2013 times. The difference my transition times as I improved by a minute. It was a rough way to set a personal best, but it salvaged my day. It was a lot of fun racing and hanging out with some CTC athletes as well. Huge thank you again to my wife, Ondi. Thank you for taking the kids to the river, swimming pool and park. Thank you for your encouraging words throughout the trip. Thank you for keeping the kids entertained during the 7 hour round trip car ride. Lastly, thank you for letting me train so much! Your turn! 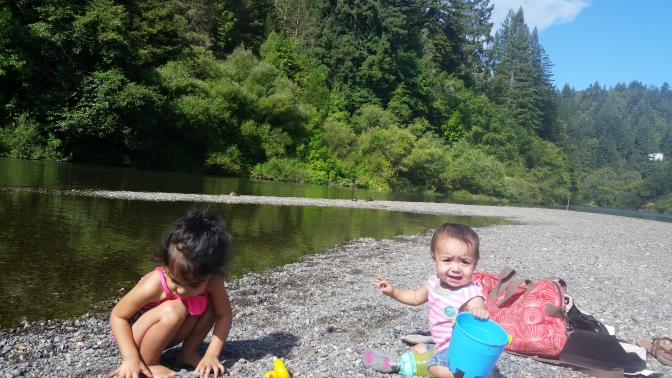 View all posts by triathlonmanny