I’m starting to develop a love hate relationship with the half ironman distance. It’s like when you start to eat a tub of ice cream and those first few bites taste so good, but all of sudden you are sick to your stomach. Part of me feels that the distance is just a half hour too long…but the other side of me, the lactose intolerant side of me, says if half ironmans were easy, I wouldn’t be doing it.

Ironman Oceanside 70.3 would be my third half ironman and I was looking forward to getting the bad taste out of my mouth from my last half ironman at the 2016 edition of Vineman 70.3 where I overcooked the bike and death marched the run.

I ended up finishing Oceanside 70.3 found wanting. What did I want? I’ll answer this question at the end of the blog.

The 1.2 mile swim was in the Oceanside harbor, beautifully protected by jetties. The water temperature was a warm 63 degrees. Side note: I did a triathlon in April last year and the water was so cold (sub 58 degrees) I vowed to be better prepared for cold water. I stumbled upon a triathlon article about cold water swimming, written by a guy who swims in the frigid English Channel. He recommended taking cold showers to acclimate to cold water swimming. Studies have showed cold showers can reduce the shock of cold water swimming by 50%! You should google the other benefits of cold showers…it’s pretty interesting.

The swim was a rolling start as opposed to the traditional age group wave start. This meant instead of starting at a pre-assigned wave time, the organizers had us line up based on our expected swim finish and walk down the boat launch over a timing mat to start the swim. It’s a smart change in my opinion as it allows faster swimmers to start first and not be impeded by slower swimmers. It also eliminated the initial hectic merger of swimmers the first 50-100 meters. I seeded myself with the 2nd group of swimmers in the 30-35 minute expected swim time. I traditionally head to the start with my wetsuit on 15 minutes before the start. The problem was the start chute was crowded by slower swimmers who got to the line a lot early than I had planned on. It took me a few minutes to squeeze by a lot of people to get to my swim group. I wasn’t the only one that had this issue. Some of the pros actually almost missed their start because of the crowded swim chute line and had to jump in the water and swim to the start. I’m sure the organizers will fix this issue next year, if not plan on getting to the start at least 20 minutes before your expected start time.

My goal swim time was sub 31 minutes. I swam in the mid 30 minutes for Vineman 70.3 last year. I figured the extra buoyancy of the salt water swim would counteract the ocean water undulations. The swim is something I normally tolerate and not exactly look forward to, but I really enjoyed this swim. I loved the sunrise swim, the little to no undulation on the way out and the mild undulation at the turnaround. The sun in my face on the way back proved challenging to sight, but I just followed the swimmers in front of me trusting they could see better than me as at the turnaround my left eye was filled with salt water and I didn’t want to stop and re-adjust my goggles. I came out of the water with a swim time of 31:23, 16th in my division. A little slower than I would have liked. My post-race swim analysis is that I was sighting too much. I probably looked like a mole in a whack a mole game. Onto the bike… 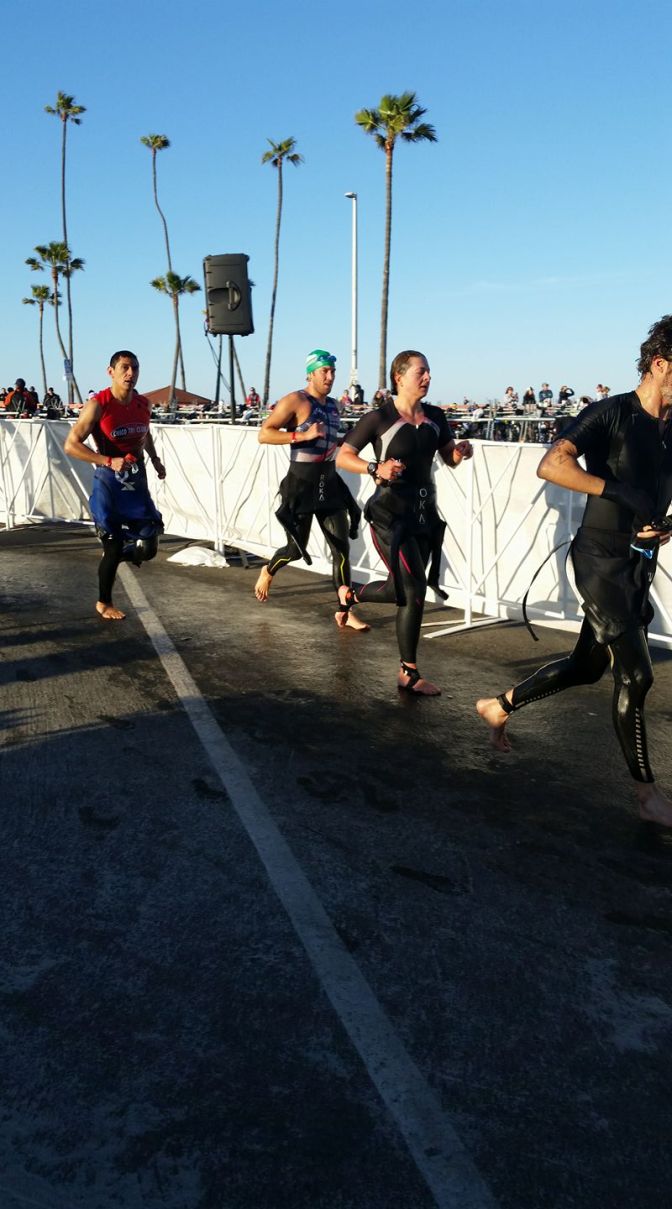 The bike is mostly in the beautiful Camp Pendleton Marine Corp base. The coastal hills were a vibrant green given the winter rains. It was also cool seeing the marines volunteering on the bike course. The bike route was a challenging 56 miles with about 2,500 feet of climbing. Before the race I read some really good advice from an interview with professional triathlete Lionel Sanders, an uber biker and the defending Oceanside 70.3 winner who defended his title in impressive fashion. He said most age groupers start the bike too hard and that the first 30 minutes of the bike is where most of the damage is done. I heeded the advice, especially since I over did it in on the bike in my last half ironman and my bike training has not been ideal given the rough Northern California winter. I felt great on the hills, pedaling with a smooth stroke and passing lots of people. The problem was the downhills, flats and false flats. I was getting passed on these sections as I just didn’t have the power output and was hesitate to dig too deep. Coming into the last 5 miles I did a self-assessment on how I was feeling. Energy levels felt good, legs felt surprisingly good, and my motivation was high. I even had a chuckle when a 31 year old women passed me on the bike in the last 3 miles. I did a double take and actually ran into her at the athlete food tent after the race. I told her good job and great bike split. My bike split was 2:34:44, good for 8th in my division. It’s hard for me to judge this effort given my current bike fitness and my conservative approach to the bike. My race split coming out of T2 was 3:12:42 and my personal best for the 70.3 distance is 4:38. I didn’t want to get my hopes up, but a PR was not out of the question… 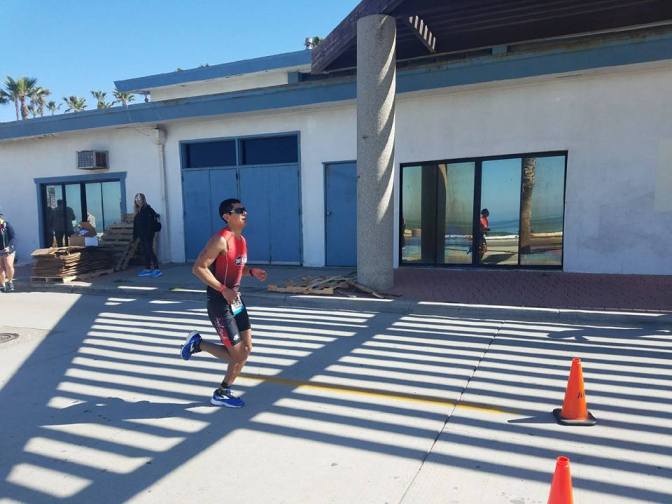 The 13.1 mile run consisted of two loops. In the Lionel Sanders interview I mentioned above, he also said the first 5k of the run is the danger zone for going out too hard. I’ve never gone out too hard on the run. I didn’t think it was possible given how bad your legs usually feel the first mile.

The “Go Chico/Go Manny” chants were abundant on the run. It was really cool having my wife, kids, mom, little sister, in laws, 6 Chico Tri Club teammates, my teammates’ supporters, and random people who recognize the Chico name cheer me on.

I’ve said before the first mile of the run is one of the hardest miles given the transition from bike to run, but my legs felt surprisingly good and the first mile split confirmed this as the watch read 6:07. It felt great. It felt smooth. It felt easy. The first mile is slightly downhill, so I knew that split was a little skewed. 2nd mile 6:20, 3rd mile 6:25, 4th mile 6:16. I was rolling. At this point, I actually thought I was sandbagging a little bit, but I didn’t want to get cocky, so I told myself not pick it up and wait until 4 miles to go before I upped the intensity. 5th mile 6:17, 6th mile 6:37, 7th mile 6:33…and then my fuel tank light went on. 8th mile 6:43. I averaged 6:25 mile pace those first 8 miles (1:24 half marathon pace). The wheels started to come off…9th mile 6:55, 10th mile 6:57…I started feeling a little dizzy, the legs were heavy. The gradient changes were annoying me. I knew my PR possibility was in jeopardy and it was at this point I had a poignant moment. I thought to myself: I could “dig deep and go to the well” for these last three miles and risk being in the medical tent due to nausea from dehydration with a personal best time in hand, or I could pack it in the next two miles, push the last mile, enjoy the rest of the day with my family and kids sans medical tent. 11th mile 7:18, 12th mile 7:16, 13th mile (1.1 miles) 7:12 (6:33 mile pace). I chose the latter and part of me feels a little sheepish about it. I missed my PR by a little over a minute. Run split was 1:26:52 (4th best in my division). Overall time 4:39:52 (4th best in my division). Post-race run analysis says I didn’t drink enough on the run. The local who my family and I was staying with explained to me how the ocean breeze deceptively keeps you cool and before you know it you are dehydrated.

So, back to the question in the first paragraph. What do I want?

Triathlete.com: You mentioned it’s been a long couple of years, including two Ironman world titles. What keeps you motivated to go after another?

Frodeno: It’s still something I feel like I haven’t mastered. I’ve suffered through it well. I would love to get that feeling of actually feeling great in Kona. In terms of how I’ve gotten to feel in a European Ironman. I guess you’re never really going to feel that way in Kona, but I still see improvements in my training. I’m being kept very honest by my training partners. It’s the daily seek for excellence that keeps me going.

This dude has two Ironman World Championships, but what keeps him motivated is “feeling great” in an Ironman, and seeking “excellence.” Two championships! He sounds crazy, but I get it. Look I have no Kona desires at this point, nor am I in the same stratosphere as Frodeno, but I too want to be able to execute a masterful triathlon performance. I believe it’s possible with the right training and well executed race plan. If the best long distance triathlete thinks it’s possible, I believe it’s possible too. Here’s to seeking excellence daily!

To end on a positive note, here’s a list of positives: 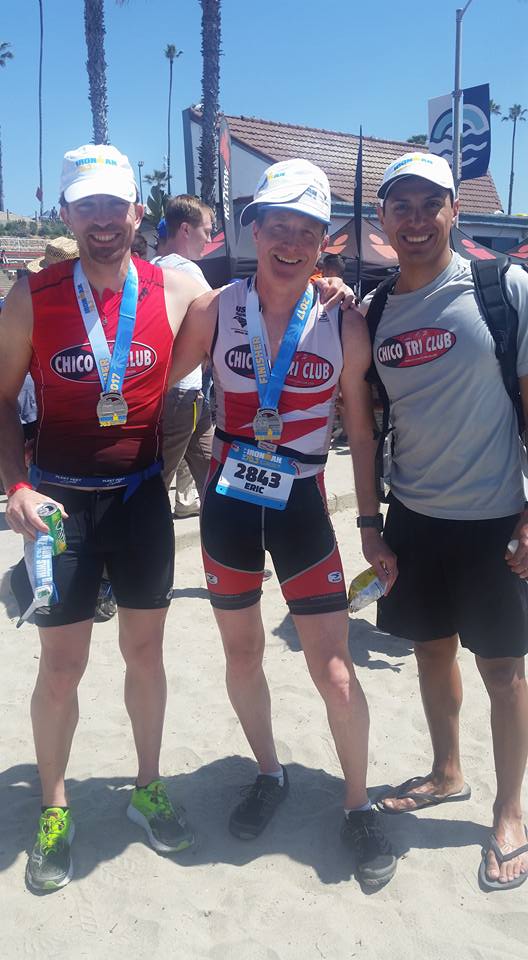 Josh, Eric and I from left to right. I caught Josh on the steepest hill on the course (12% grade) and I was thinking before I saw him that I wished I had one more lower gear. I wouldn’t say I was overgeared (50/34 and 11/28), but after I passed Josh, Josh quipped that he was stuck in his big ring (53) ouch!

Funny story about Eric. I ran into Eric in the porta potty line before the race and I told him something along the lines of “hey Eric!, if the air temperature is in the 50s and the water is 63 degrees, the water should feel warm right?” Eric, being a physics professor, gave me a technical answer, telling me I wasn’t accounting for thermal energy transfer or something of that sort…he’s always good for a science lesson, even on an early morning triathlon race.

Jason and I – My transition set up was really close to my CTC teammate Jason Berry. Good to see a familiar face on race morning. Always calms the nerves!

Shout out to Gloria Pertruzzelli for cheering so hard for me and CTC and her husband Ken Petruzzelli for a great race.

Shout out to Al Masterson for the Go Chico chant!

Shout out to Michael Daily for a great race and for picking up my award for me!

Shout out to my wife for her unwavering support. Love you!

Shout out to my mom, sister, and in laws for making the trip to support me and help with the kiddos.

Shout out to Bryan and Leesa Lamb for hosting us at casa de Lamb. The 8th wonder of the world.

View all posts by triathlonmanny

One thought on “Ironman 70.3 Oceanside”